February 6, 2016: The Real Clear Politics poll shows staggering numbers as of the beginning of February. After last night’s February Republican debate, it was clear that the audience wasn’t a fan of Trump. Donald Trump dealt with them head on, and called them out after a loud boo went across the crowd expressing disapproval of Trump’s comments. 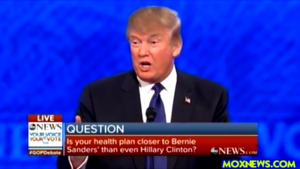 Trump exploited on the nationally televised February Republican debate that the audience was filled with political donors, namely insurance companies, who gave money to other parties on the stage. He pointed out that he hasn’t taken any donations from them and remained a self funded campaign, which was the predominant reason for their lack of support as he spoke against their getting rich off Obamacare. More booing continued while the Twitter chatter fired up with Trump-talk.

In an eye opening moment, the viewers at home realized that the audience who paid money to other candidates were there to humiliate Trump to the best of their ability. With insults flying around between other candidates, however, Trump stayed on top of his game and held his own without so much as a flinch.

A review of the RCP polls after the February Republican debate shows that Trump is consistently showing at the top of multiple polls, placing him in a strategic position that shows that America isn’t buying the political jargon, and eyes are starting to open as to the reality of long hidden political agendas. Those who pay out top dollar want their candidates to win. Why? Dutiful paybacks and special favors can be obtained by those on top of the financial food chain who support a winning candidate. Checks can be cashed and money can be made. Americans are not just hearing what’s happening. They’re listening now, and seeing it first hand as Trump cannot be bought. A historic campaign has been happening as Donald Trump steps up and shines a spotlight on the dirty game. In the interim, he receives wild booing from audiences full of people donating to other candidates for personal gain.

America is waking up to the grim reality of what’s been going on behind the scenes as Trump continues to exploit the evils in front of millions of viewers. It’s about time the beast is revealed, as the American people finally have a business man who is unafraid to pull off the veils of the monster called politics.

Have a look at the  latest polls on Real Clear Politics following the February Republican debate.

Miss the February Republican debate? Watch it here by clicking the video below.