This is a cold hard look at how media is desperate for Trump to fall from the top while they cash in on profits.

Media is showing strong desperation to do whatever possible to yank Donald Trump out of the lead. They have taken portions of sentences and turned them into headlines, in attempts to fire up race wars. Statements are either taken out of context, or they have been edited. Deception is used in desperate attempts to get website, channel and blog hits to increase ratings. What has transpired as a result is a war of words and shouts of hatred. The media is thereby successful. Trump has taken it like a champ, yet he still continues to get slaughtered by desperate media ploys to do whatever they can to bring money into their bank accounts. Do you think they are making no money off this?

The Truth Behind Internet Blogs and News Headlines

By attacking Donald Trump with both barrels, here is what you don’t realize is happening. The blogs and websites of these media channels have a job to do. Plug in the proper keywords to the article to gain web page views using good old Search Engine Optimization. They will choose words that they know will rank high in Google, and fill the article with strategically placed keywords and phrases. They’ll use images in the blogs, and name the image files specifically using similar keywords. Search engines will pick up on the traffic being flooded to the site through Social Media clicks and shares, and the company begins to profit. Fast.

What’s That Ad There For?

Advertisements are placed in the midst of these “hot news” articles. Click the ad and the site owner who released the article gets paid. The more interesting the ad, the more likely you are to click it. If your Google searches are set to send you ads specific to the way you search, and your topics of interest, then you’ll see even more “interest based ads” that you’re more likely to click on. You then land on the advertisement page and buy something, and the site owner may make even more money. For websites with massive followings, companies will pay filthy amounts to be featured in the middle of top stories. So whomever owns that website full of ads makes the money off your clicks. In other words, the more viral the article goes, the more money the company gets. This is the very thing that makes the big bucks. By you reading an article and clicking the image of an advertisement, the website who put the article out may be making a lot more than you think.

How does a graphic designer find an image to use in a graphic design project? Buy the image, use image software, or get one for free from image providers. Simply Google the description of the photo you’re looking for, (in this case, “soldiers”) and you can buy the image, save it, insert it into your marketing design, and you’re done.

In the Tweet put out by Trump, the graphic designer used an image, which had a tiny blended image of soldiers, layered into the red stripe of the US flag. The marketing person saw the soldiers blended with the flag, made a nice image, and apparently did not do a thorough inspection of soldier patches on the sleeves. Because she was unfamiliar with particular soldier uniforms, as were millions of others who saw the overall image on the Trump Tweet, she unknowingly used an image which was later found to contain Nazi soldiers. One who was an expert in Nazi military wear spotted the small mishap. The designer had no idea that what looked like a nice graphic actually contained soldiers who were not American.

This got out to media, who saw it as an excellent way to make money at Trump’s expense. All they needed to do was write an article as fast as possible, fill it with the right content, fix the keywords in perfect position and release it. The article goes viral, other advertisers catch on, and follow suit. Before you know it, the companies are raking in cash as the readers click or scroll past ads. Impressions and website/article traffic skyrocket, and you, the reader, just helped them increase profits.

Here is the art that was released on Donald Trump’s Tweet. An image of dollars are on the top red stripe. The White House is in the middle red stripe. Soldiers walking are on the bottom red stripe. Trump’s face is layered into the blue section of the flag. #MakeAmericaGreatAgain heads the image. 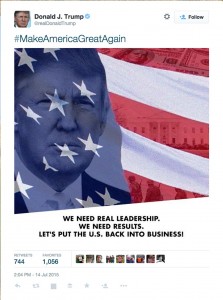 Have a closer look at the layered graphic image, and see how millions, not just Trump’s graphic artist, did not pick up on the soldier’s uniform style or patches.

The world of media and bloggers are getting their pockets loaded by website hits that are ignited by propaganda. What they want is for the world to think that this conspiracy theory links Donald Trump to Nazis. Frankly, it is not all about Trump, but more about rankings, ad sales, and increasing traffic.

The media is ruthless. The best way to beat them is to not click any ads on their sites, or reduce time spent on their sites. This will lower duration time on their websites and blogs and increase bounce rates. A high bounce rate of say, 80% means that 80% of the readers viewed the article and then left, or bounced off the site. A low bounce rate, of say 19% means the readers read the article, and stayed on the site reading other articles. Your time on the site is clocked in duration, and many times so is your geographic location. Google “how Google AdSense works” to see how Advertisers (those who own the ads) and Publishers (those who own the website that the article is on) work. Also keep in mind that “Contributors” are usually outside bloggers who write an article, and contribute it to the Publisher (website owner). The contributor may be an expert on the topic, or, they may actually sub out the job of writing the article to someone in another country, pay them $50, say they wrote the article, and submit it to the site owner. How does a contributor make out? Either they have a link to their work, pointing you to them so you can hire them to write for you blog, or they get paid by the Publisher to contribute good content (or, an article).

How You Can Help

Stay informed as to how the media is using tactics to fill their pockets and pull out any tricks possible to make a fortune off Donald Trump. As long as he’s on top, they’ll keep using his name to rake in the cash.