Today, news was confirmed that Amazon has taken down the entire Parler website from their web hosting service. As Parler has been deplatformed, nearly 20,000,000 users now have no access to their accounts or any of their information. Parler CEO has also received death threats.

Parler is in pursuit of legal action against Amazon Web Services, with allegations of Antitrust Violations and Breach of Contract.

A portion of the Civil Action states:

“This is a civil action for injunctive relief, including a temporary restraining order and preliminary injunctive relief, and damages. Last Month, Defendant Amazon Web Services, Inc. (“AWS”) and the popular social media platform Twitter signed a multi-year deal so that AWS could support the daily delivery of millions of tweets. AWS currently provides that same service to Parler, a conservative microblogging alternative and competitor to Twitter. When Twitter announced two evenings ago that it was permanently banning President Trump from its platform, conservative users began to flee Twitter en masse for Parler. The exodus was so large that the next day, yesterday, Parler became the number one free app downloaded from Apple’s App Store. Yet last evening, AWS announced that it would suspend Parler’s account effective Sunday, January 10th, at 11:59 PM PST. And it stated the reason for the suspension was that AWS was not confident Parler could properly police its platform regarding content that encourages or incites violence against others. However, Friday night one of the top trending tweets on Twitter was “Hang Mike Pence.” But AWS has no plans nor has it made any threats to suspend Twitter’s account.”

Get The “Make America Godly Again” Shirt on Amazon: 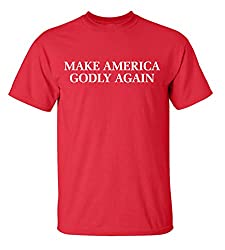