On June 2015, Donald Trump announces his candidacy for United States President. He hit on some major issues and he hit the issues hard. He pulled no punches in his speech. 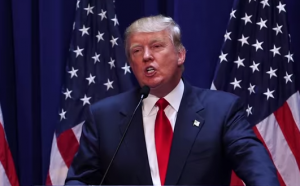 “The US has become a dumping ground for everybody else’s problems”. -Donald Trump

What did you think of the 2015 Donald Trump Presidential Announcement video?

[polldaddy poll=8937565]
If you wish to support Trump’s Campaign, please do so by visiting Donald Trump’s Official Website support page.

*TrumpSupporters.com does not accept or receive donations related to the campaign, and is independently owned and operated by an anonymous Trump Supporter. This website is in no way affiliated with Donald J. Trump companies or organizations, or political parties or their affiliates.

Trump Supporters is Back for Trump 2020