The crowd was roaring and ready for the first GOP debate to get started.

The kickoff of the first Republican debate shows Megyn Kelly asking Trump his first direct question within 15 minutes. She found it worthy to bring up that he has insulted women in the past. He interrupts her and spouts out, “only Rosy O’Donnel!”, to which Megyn Kelly corrects him, in a patronizing tone. Trump, clearly in no mood for insignificant questions, says he doesn’t “have time for total political correctness”. “What I say is what I say. If you don’t like it, I’m sorry…” (Nice try, Ms. Kelly. What a waste of a question.) 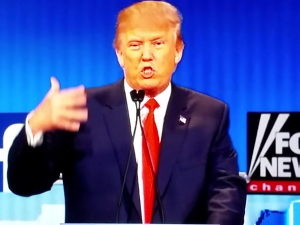 On another question in the first GOP debate, Trump is challenged on the “Mexican” remarks, of which he has been called out by Jeb Bush. The moderator, evidently in attempts to get a good show, asks Trump to face and answer Bush. Trump does so for about 2 seconds, and then turns back and says “money is going out and the drugs are coming in”. He doesn’t mind people coming in legally, he said. He then called the leaders of the USA “stupid”, because they’re allowing the illegal immigrants into the country. Trump showed aggression when pushed by the moderator, who asked him what evidence he has to his allegations of what’s going on at the border (apparently the moderator hasn’t watched the news lately). Trump confirmed that he has visited the border, and been advised by border patrol and others he deals with, as to exactly what is going on.

In another low blow attempt to shatter Donald Trump, he is then asked about his filing of bankruptcy on past corporations he’s owned. He clarified that he personally did not file bankruptcy, and the moderator seemed to push him harder, in an effort to keep focus on the word “bankruptcy”. He clarified that he used US laws to his advantage when filing, and did so for the benefit of his businesses. While Trump was being blasted because his bankruptcies allegedly costed banks a billion dollars, isn’t is logical to wonder just how much the bank made off Trump, and why this wasn’t mentioned? (Food for thought).

Many large corporations have done the same when the time called for it. The bankruptcy laws allow for a corporation to file various chapters of bankruptcy, and this doesn’t mean the individual is personally affected.

It should be noted that filing bankruptcy on a corporation or legal entity does not, in fact, imply that the individual who owns or takes any ownership of the corporation, is themselves, bankrupt. In fact, one can continue to own several businesses while bankrupting one. The owner can wipe out the debt, dissolve the individual corporation, and move on with the more successful entities which are more profitable in terms of eventual growth.

Alleged Supporters Voice Their Disappointment with Trump (Were they really supporters?)

After the first GOP debate ended, a group of Republicans and several alleged Trump supporters sat in a room, and were asked if they continued to support Trump. We heard nothing but negatives. It might be noted that the responses of some who answered did not sound to some of us, to be natural. It almost appeared in the eyes of some, that the actual participants were coached to make such comments. One might even go so far as to wonder what was going on with Fox News tonight, and exactly what they were trying to gain during the first GOP debate. While other candidates were called out for some of their positions, it seemed that the cards played against Trump were ruthless, and staged according to the perceived “punch” that they would pack.

Many Trump Supporters voiced utter disgust on Fox News (Megyn Kelly’s) Facebook page, vowing to never support her show again, due to her treatment of Trump and her obvious contempt toward him.

Now that you’ve seen the first GOP debate, and how Trump responded to questions, do you think you’ll continue to support him?

First Trump Debate 2016 – Trump vs Clinton: What to Look For